Construction on upgraded space expected to begin in 2022 or later

The exterior of the Medford site will have a residential feel, including pine siding and architectural shingles as well as a porch and landscaping. There will be a staircase and ramps in the front and back for accessibility. The building will also utilize solar panels.
Photo Renderings
The library hosted a virtual public meeting on Monday, Jan. 25.
Photo Screenshot
Previous Next
Posted Thursday, January 28, 2021 12:00 am
Nicole Fuentes

It’s the moment we have all been waiting for... increased access to our beloved Patchogue-Medford Library from the northern portion of the community, namely Medford.

The library hosted a virtual public meeting on Monday, Jan. 25. H2M architect Katherine Stone, tasked with the project, walked through the plans for the new library facility. About 45 members from the community attended the open meeting.

The branch will be a 5,500-square-foot facility neighboring the Medford Athletic Complex on Horseblock Road in Med- ford. It will contain meeting room space, computer access, WiFi, an outdoor area, parking and, of course, books and other library materials.

Ample parking will be provided as well an employee parking lot and a separate employee entrance. The property will also feature an outdoor program space in the front of the building next to the entrance as well as the option to expand in the rear.

The interior will have a large meeting room accommodating about 70 people and outfitted with closets and a kitchenette with the ability to separate it into two rooms. To the right of the entrance will be restrooms and a coffee bar/refreshment station. There will also be an unfinished lower level with the ability to convert to another meeting room. The building will be raised approximately 30 inches above grade to accommodate for basement windows.

According to Stone, the rooms will have flexible furniture and glass partitions to make the space feel connected. The circulation desk will be in the rear main library room, which will feature a flexible stack layout, a children’s and young adult area and workstations and a reading area with a gas fireplace. Behind the desk will be a staff room and an extra small meeting space.

The exterior will have a residential feel, including pine siding and architectural shingles as well as a porch and landscaping. There will be a staircase and ramps in the front and back for accessibility. The building will also utilize solar panels.

“This project is near and dear to my heart. I grew up in Medford in a family of library lovers. We visited the library in Patchogue quite often to stock up on books and movies or to go to a pro- gram,” said community relations manager Michele Cayea. “It wasn’t always convenient or easy to make the time to get there; we often had to wait until the weekend. Now families are busier than ever. Having a Medford location will allow Medford residents access to use the library and our services more often. I am very excited for what opportunities this space and location will bring!” 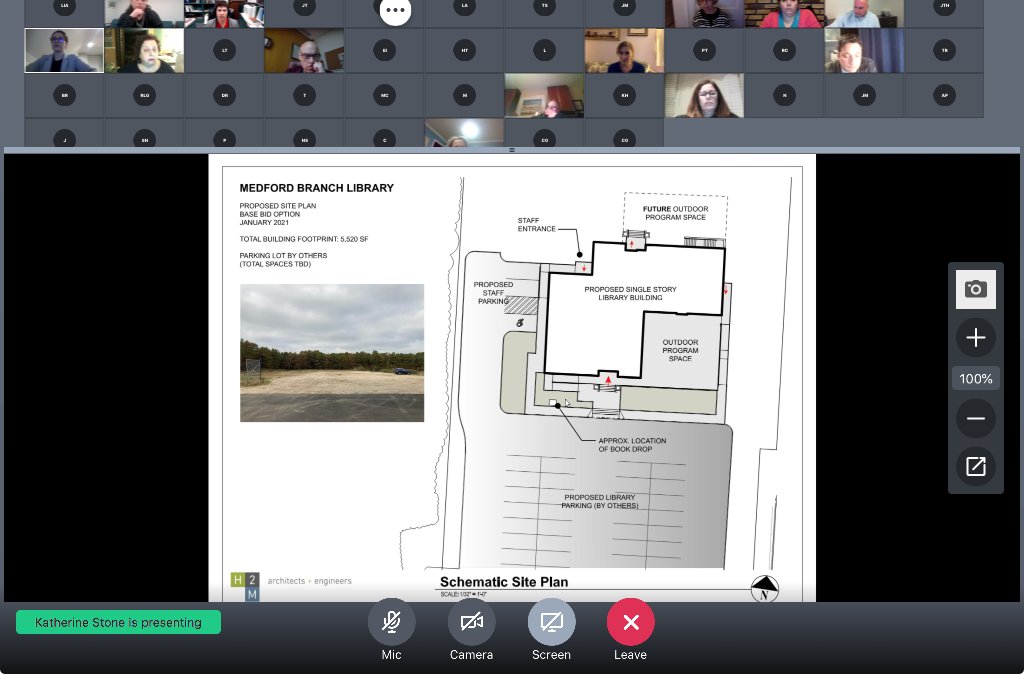 The library hosted a virtual public meeting on Monday, Jan. 25.

When will the Medford branch be open?

The estimated timeline of the project is 18 to 24 months. Design plans will be submitted to the New York State Department of Education by early summer and once approved, the construction bid process can start.

What is the cost?

The Town of Brookhaven has leased the property to the library at no cost and the Medford Hamlet Foundation donated $1.6 million towards the construction. The total project is projected at $2.5 to $3 million. The library board has committed $1 million from capital reserves to complete the project and was recently recommended to receive NYS construction aid in the amount of approximately $88,000.

“Medford residents have been looking to increase access to their library ser- vices since 1966,” said library director Danielle Paisley. “But the money and resources were never available at the right time. We are truly grateful for the community collaboration that has taken place, and are excited to see this project finally come to fruition.”

The path to the branch

Assemblyman Joseph DeStefano shepherded the bill through the Assembly to allow the library to be built at the Athletic Complex.

Back in 2018, the 1.48 acres of parkland located at the Medford Athletic Complex was approved for alienation to be leased to the Patchogue-Medford Library for the construction of a Medford branch.

Joan Travan, president of the Medford Hamlet Foundation, said that of the $1.5 million donation, the foundation raised $1 million and the town dedicated the other half-million to the project.

Back in 2014, the state planned to partner up with Brookhaven Town on the construction of a roughly $4.5 million community center at the Medford Athletic Complex at the corner of Route 112 and Horseblock Road. However, those plans fell through due to red tape in Albany.

Original attempts to build the library included the purchase of the “wedge” located on Route 112 near Tremont Elementary School for a community center; however, it was always too expensive and never succeeded.

Details about the branch

The branch, according to Paisley, will offer about twice the size of the library’s Carnegie Library branch located on Main Street in Patchogue Village and will have everything as in the main library on a smaller scale, including children’s, teen, adult and bestsellers sections, as well as computers and public meeting spaces.

All materials will be shuffled between libraries and programming will take place in the community rooms.

Main library staff will be repositioned in addition to new hires being added.

Paisley also hopes to see the town help create a learning garden and some landscaping as well as a parking lot.

The branch will not only offer a community space for the residents of Medford, but also a closer library resource than the main library currently located on Main Street in Patchogue Village. According to Paisley, depending on the time of day, it could take some Medford residents up to 30 minutes to travel to the library in traffic.

Other items that may interest you